This year marked my 14th trip to the New York Toy Fair. And since Toy Fair is always scheduled during Valentine’s Day, this is my 14th year to be away from my wife. So, instead of sending her flowers or taking her to dinner, I just bring her home the latest X-Men action figures and a remote controlled helicopter. Yes, the marriage is going well… thanks for asking.

Almost 27,000 professionals involved in the toy or retail industries from over 100 countries converge on New York to attend the largest and most successful toy trade show. Buyers from over 6,000 retail outlets search through over 100,000 products for “gems” to sell in their stores. Wholesalers and inventors alike display their toys in hoping to find a gateway into the global toy market. 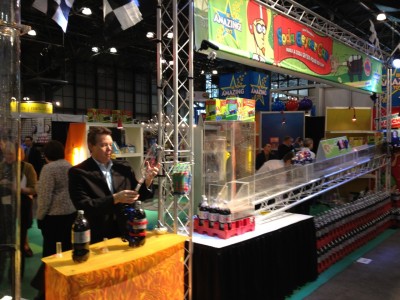 It’s always fun for me to get the opportunity to debut my newest toys at the Be Amazing Toys booth. This is a company that we started in 2002 to serve as the wholesale division for our science toys that were best suited for specialty toy stores and mass-market retailers around the world. After growing and selling the company in 2004, I continue to work in Product Development… which is just a fancy way of saying that I create new science toys and kits each year and market them through Be Amazing Toys.

This year’s hot products were the Mentos Geyser Car and the Energy Stick. Over the course of three days, we launched over 800 Geyser Cars in the booth as prospective buyers considered carrying the new product. Powered by a 2-liter bottle of diet soda and only three Mentos, the new Geyser Rocket Car will travel over 150 feet at a rate of about 12 miles per hour. The fancy Plexiglass enclosure created by our design guru, Jeff Brooks, kept the crowds from getting soaked with spewing diet soda, but the demonstrator (that’s yours truly for part of the time) was not completely protected from the erupting geyser. By the end of the day, my once pale white hands and arms were now a strange shade of carmel brown… which closely resembled the color of Diet Coke. Go figure.

The less messy but ever popular Energy Stick garnered lots of attention from a wide range of interested buyers. It’s a battery-powered device that turns your body into a human conductor of electricity. You and a friend hold onto each end of the Energy Stick while completing the circuit with your other hands. When the circuit is complete, the Energy Stick flashes and the buzzer lets you know that you’ve completed the circuit. Rest assured that there was lots of hand holding going on in the Be Amazing Toys booth at Toy Fair.

Both the Mentos Geyser Car and the Energy Stick are currently available at SteveSpanglerScience.com and will be coming to a toy store near you later this year.

But the best part of Toy Fair for me is being able to walk the exhibit floor to meet up with old friends and to make a few new acquaintances as well. Out of the clear blue, I turned the corner and ran into Cindy Burnham, one of the co-creators of the famous Tornado Tube product. Cindy’s husband, Craig, actually invented the toy many years ago, and it continues to be a best-seller today. 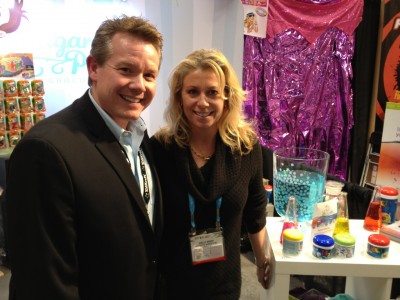 I also had the pleasure of meeting Shelly Brady, the creator of the original Tub Tints. Over the years, our team has created dozens of products that use her fizzing tablets to color water. Shelly is one of those success stories where a great idea gets teamed up with a big company and the rest is history.

I also did a live television segment with Christopher Byrne, the Toy Guy, to talk about the hottest toys this year.
It’s easy to gauge the success of Toy Fair by the number of business cards, postcards and other forms of wadded up paper that are bursting out of every pocket. There are lots of phone calls to make, e-mails to write and toys to ship in 2012.
February 15, 2012/0 Comments
https://www.stevespanglerscience.com/wp-content/uploads/2017/07/steve-spangler-science-logo-435.png 0 0 stevespanglerscience https://www.stevespanglerscience.com/wp-content/uploads/2017/07/steve-spangler-science-logo-435.png stevespanglerscience2012-02-15 07:00:392012-02-15 07:00:39Toy Fair 2012 – The Effects of Launching Over 800 Mentos Geyser Cars