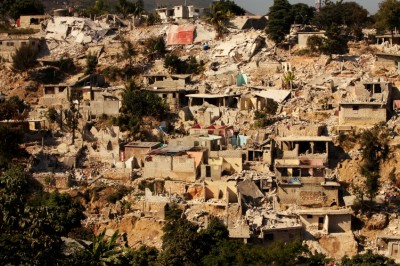 Earthquakes have been in the news a lot recently. It’s scary for children to watch the news and see the mass destruction, death and rubble caused by a quick shaking of the earth. From the damage in Haiti to Chile and most recently in Turkey, earthquakes occur across the globe.

The surface of the Earth is made up of many puzzle pieces, called tectonic plates. The pieces move and slide along each other all the time. The places where the plates meet are called plate boundaries. An earthquake happens when two plates slip past one another on one of these boundaries, also called a fault line. Most earthquakes occur along these fault lines.

The boundaries of the plates are rough and get stuck while the rest of the plate keeps moving, causing stress on the plate. Once the plate has moved too far, the stuck edges become unstuck along the fault and the boundary area moves suddenly, causing an earthquake.

The location directly above an earthquake is called an epicenter. The place below the earth’s crust where the earthquake actually starts is called the hypocenter.

Sometimes an earthquake will have small quakes called foreshocks. They happen in the same area where a larger quake will occur before the actual earthquake happens. Geologists can’t tell if an earthquake is a foreshock until after the larger quake happens. Small quakes called aftershocks will then follow the large quake. These can continue for weeks, months or years after the main quake. In Haiti, scientists predict aftershocks will continue after the magnitude 7.0 quake that hit on January 12, 2010 for months and maybe years.

During the earthquake, the plates of the earth actually move. The shaking is a result of the stored energy in the edges that are sticking. When the force finally overcomes the friction and the jagged edges come unstuck, the stored up energy is released. The energy radiates outward in a form of shock waves –like ripples on water only they shake the earth as they move through it.

In Chile, the 8.8 earthquake that hit near Concepcion, actually moved the city 10 feet to the west. It wasn’t the only area that moved. The nearby city of Santiago moved 11 inches to the west and Buenos Aires, which is almost 800 miles away from the epicenter, moved an inch.

Thank you to the USGS.gov and Wired.com for informative articles on earthquakes.

For more information on the Science of Earthquakes for Kids, Go to the USGS.gov website. They also have a section on science fair project ideas surrounding earthquakes.

For more information on the 5 Most Dangerous U.S. Earthquake Hot Spots Beyond California, go to Wired Science.

FEMA.gov also has a kids section on earthquakes.

MSNBC.com has an article on how the earthquake in Chile may have shortened days on earth.

Ice Skating – A Classic Lesson in Physics Which helmet protects your head the best?
Scroll to top
Create a new list