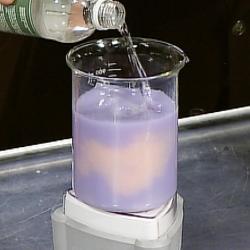 If you’ve ever wondered how those antacids really work inside your stomach, the Milk of Magnesia demo is easy to perform and really illustrates the concept of pH change and the buffering power of magnesium hydroxide. I first saw the demonstration performed by Sue Ann Berger during a Flinn Morning of Chemistry many years ago. She originally called the demonstration M.O.M. to the Rescue, and the audience reaction from her standing room only crowd was fantastic. The Milk of Magnesia demo is a favorite among chemistry teachers because of the visual way it teaches the buffering action of magnesium hydroxide. I recently shared this cool science demo on 9News.

Milk of magnesia is a liquid used as an antacid and, sometimes, a laxative. Also known as magnesium hydroxide or Mg(OH)2, the solution is taken orally. The original concentrated formula was concocted by a man named Charles Henry Phillips in 1880, and sold under the brand Phillips’ Milk of Magnesia. Today, the rights to the name “milk of magnesia” appear to be owned by Bayer Corporation and, interestingly, “Phillips’ Milk of Magnesia” is owned by Sterling Drug.

Milk of magnesia is an alkaline suspension, meaning that it undergoes a neutralizing reaction when encountering anything acidic. This makes it an effective combatant of excess stomach acid when taken internally. Too much hydrochloric acid (HCl) excreted by the parietal cells in the stomach can lead to indigestion, heartburn and stomach ulcers. Milk of magnesia in the form of an antacid is dosed from 500 mg-1.5 mg (0.02-0.05 oz) and readily enters the stomach, where the hydroxide ions in milk of magnesia combine with the hydrogen ions in HCl to calm overactivity in the stomach.

Do You Have Acid Breath?
20 replies