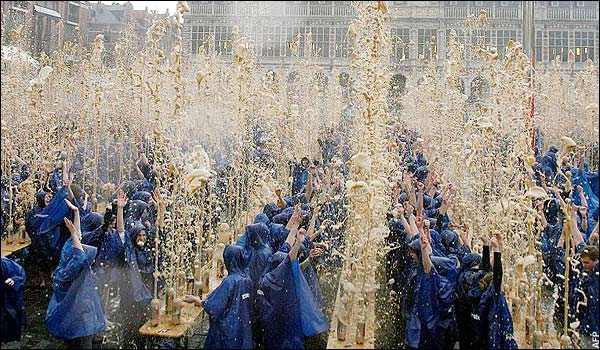 … and the world records just keep rolling in. Finally, the Europeans get into the game and set the bar just a little higher. Here’s the original Mentos Geyser experiment (just in case you’ve been locked away in a secluded cave for the last two years). Judging from the photos, the event was extremely well organized and produced some very impressive soda geysers. It wasn’t all that long ago that the Americans were getting dinged by our friends overseas for wasting their popular Italian/Dutch chewy mint candy along with thousands of liters of Diet Coke. Now, they hold the world record – that must have been their secret strategy!

According to Telegraph.co.uk, the explosive record-breaking event was held in Ladeuzeplein square in Leuven, Belgium. But… where’s the video? Does anyone have a link to the video?