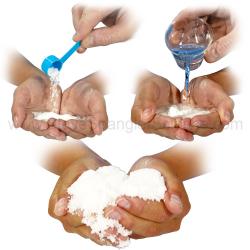 The last time I did the weather report on 9News, the switchboard lit up with confused viewers. I neglected to mention that the snow was faux snow… created by mixing water with Insta Snow. The request to do the Insta Snow demonstration came from a viewer who wanted to cover her lawn in fake snow. Is it possible? Sure… anything is possible, but the average person would probably be happy playing with a few gallons in a big container. If you're unfamiliar with Insta Snow, it's an amazing superabsorbent polymer that turns ordinary water into a white fluffy substance that looks like real snow. Add a little water and this fine white powder quickly absorbs the water and expands to 100 times its original size. One of the coolest things to do with Insta Snow is to let the snow dehydrate and watch as the fluffy powders returns to its original size and consistency… and you're ready to do it again.

Here are the most commonly asked questions about Insta Snow…

What is Insta-Snow? Is it really safe? 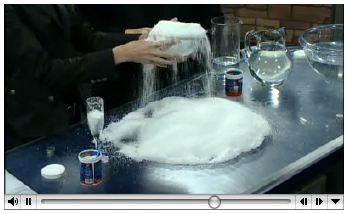 Insta-Snow is a synthetic polymer with super, water-absorbing properties. It's the only faux snow on the market today that erupts when water is added. Similar superabsorbent polymers have been used in the past to absorb moisture in disposable baby diapers… without the incredible expanding property! Insta-Snow is so realistic that it is now being used in indoor snowboarding parks throughout the world.

Insta-Snow is safe to use around children and pets. Adult supervision is always recommended when using this product. Even though the product is non-toxic (it's 99% water), keep Insta-Snow away from the eyes and mouth. If ingested, be sure to flush with water. Insta-Snow is very slippery when wet. Keep the snow off of all walking surfaces, and clean up any spill immediately.

What are the best mixing proportions?
Mixing 1 teaspoon of Insta-Snow powder with 2 ounces of room temperature water produces the best quality snow. It is always recommended to make the snow in small quantities to achieve the greatest amount of mixing. Insta-Snow powder expands 100 times its original volume. Just a small amount of powder is needed to make an impressive quantity of snow. On a much larger scale, 1 pound of Insta- Snow powder makes nearly 8 gallons of fluffy snow!

How long does the hydrated snow last?
The snow will start to dehydrate after a few days due to evaporation. Just spray the top of the snow with water and fluff the snow with your fingers to give it a fresh, fluffy look. You can also let the snow completely dry out to use it again. The dry form of Insta-Snow powder will last forever!

Why does the snow feel cold to the touch?
Since the snow is almost entirely made up of water, and the water is bound to evaporate. The process of evaporation produces a constant cooling effect. That's why it's so much fun to touch!

Will the snow ever turn back into water? No, the fake snow will not melt since it is not really ice. However, the water can be released from the superabsorbent polymer by adding salt. The addition of salt destroys the water absorbing properties of Insta- Snow forever.

Does Insta Snow have to be on a special surface?
No, Insta-Snow can be used on almost any surface except untreated wood. Keep the snow off of any surface that might be damaged by water. Surfaces that are ideal include tile, plastic and glass. Insta-Snow will not stain fabric, but normal care should be taken when applying this water-based material.

Can Insta Snow be colored?
Yes! Just add a few drops of food coloring to the water before mixing it with the Insta-Snow powder.

Can Insta Snow be thrown away in the trash?
Insta-Snow is very easy to clean up and can be disposed of in the trash. Just brush the surface clean or use a vacuum to pick up the snow. Eventually the hydrated snow will turn back into the dry powder and can be easily swept or vacuumed. Insta-Snow powder is a non-hazardous, non-toxic, environmentally safe polymer.

Is Insta Snow safe to use outside?
Yes! Insta-Snow looks so real that it is being used by special effects artists in movies to snow outdoor scenes without damaging the plants and grass. Sprinkle the hydrated snow on evergreen trees to produce a realistic snow effect. In fact, the water absorbing properties of the snow are actually beneficial to the plants. Remember, Insta-Snow is very slippery when wet. Use special care to keep the snow off of any walking surface.

Is there more than one Insta Snow on the market?
There is only one Insta Snow® as indicated by that "circle R" thing. We don't use the ® everywhere because it becomes somewhat annoying, but the name Insta Snow is a federally registered trademark of Steve Spangler Inc. (Federal Trademark Registration #2928946). But that hasn't stopped the knock-off companies from branding their own versions of a snow polymer. Our favorite knock-offs are the companies who believe that Insta-Snow is the same superabsorbent polymer found in a baby's diaper. If this were true, every time the baby went potty, the diaper would erupt to an enormous size and explode! Might be a great way to potty train the kid, but it's not true. Insta-Snow® is the only polymer that instantly ERUPTS when it comes in contact with water. The knock-off "snow" companies tell their customers to "…add water and stir the mixture for 20-30 seconds to make snow." All you have after 30 seconds is a tired hand and a cup of baby diaper goo.Just stick with the original Insta-Snow® and you'll be safe, happy and amazed!

Shrink Wrap That Kid! You Might Have Missed the Point…
Scroll to top
Create a new list