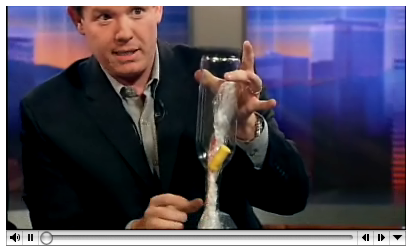 You probably received the e-mail showing a guy who taught everyone how to remove a wine cork that had been pushed completely into the bottle. The video included no verbal explanation, but viewers learned that the secret to the trick was the use of a thin plastic bag and an ingenious way to grab onto the cork. We received dozens and dozens of e-mails from people who had tried the demo but failed. Some people even thought that it was a hoax.

Well, I just had to try it… but the first bottle of wine just didn’t work (the bag kept tearing). The second bottle of wine didn’t work… neither did the third. So I switched to a nice Reisling… but no luck. Merlot? Shiraz? Now I can’t think straight. Maybe I should be focusing on the cork! Finally, I found a few bottle & cork combinations that worked. Both of the bottles featured in the video have a plastic or wax coating, but I’m confident that I’ll get a real cork cork (make sense?) to work.

During the segment on television I also mentioned that the classic solution for this puzzle used a cloth table napkin. I also said that I had never seen anyone perform this successfully using a cloth napkin – that’s why I was excited about the plastic bag method. Maybe you know how to do it using a cloth napkin and you’ll teach us all a new trick. Anyone had any success?