It was raining rockets on the playground at 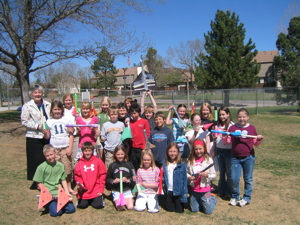 Wilder Elementary. As part of their study of space, the fourth graders built their own rockets out of nothing more than paper, tape and a little clay. But prior to putting on their rocket science hats, the students studied Newton’s Laws of Motion and experimented with inertia, friction and building some simple balloon-powered rockets in class. Last night’s homework was in the form of a challenge: Build a rocket that will fit around a piece of 1/2″ PVC pipe. Read more about the rocket launcher.

As an introduction to blogging, the fourth grade students were given the task of posting their first blog entry about their rocket launch experience. They were encouraged to write about their classroom experiences yesterday while studying Newton’s Laws of Motion (yes, they learned how to whip the tablecloth out from under the dishes) and today’s rocket launch. You can read their comments below.