You are here: Home1 / Experiments2 / Human Circuit – Conductors and Insulators

Holding hands in a circle has never been this electric!

The Energy Stick makes quite the “buzz” when you’re using it. To the untrained eye, it appears to be a plastic tube with a jumble of wires inside and two silver bands at each end. Well, those silver bands are actually electrodes. All the wires on the inside? They’re a solid state sensing circuit, tone generator, sound transducer, battery power supply, and LED lights. The perfect use for the Energy Stick is as a simple, yet fun, tool for learning about continuity and circuits. So… how do you turn it on?

Using both hands, grip the Energy Stick with a hand on each silver ring. You see flashing lights and hear an unmistakable noise like a weird siren or a sick zombie. It changes pitch if you hold on long enough, too!

Let go with one hand and… hey, it shuts off! Grab the silver ring again and the Energy Stick goes off again.

So how does it work? We thought that you’d never ask. Don’t try to take the Energy Stick apart! It’s securely glued together and you will have to destroy it to open it. You can see the major parts through the clear body of the tube. The guts of the stick include a circuit board, two button batteries, an integrated circuit, three light emitting diodes (LED), a piezoelectric transducer, a transistor, and two electrodes.

All of these elements of the energy stick remain inactive because the electric current cannot flow continuously, that is, until you hold onto each end with both hands.  Human bodies conduct electricity, so by holding onto both ends of the stick, your body is closing the electrical circuit needed to let the current flow continuously and activate all of the above elements.

Have a large group of friends form a circle and hold hands as you explain how a circle compares to a circuit. Open the circuit by letting go of the hand of a person next to you; everyone else hangs on. Grab a silver ring on one end of the Energy Stick while the person next to you grabs the other one. The Energy Stick flashes and buzzes because the circuit is complete again! Should anyone break the circuit, the detector stops. Explain that switches and breakers are nothing more than devices that either connect conductors to turn something “on” or separate them to turn something “off.” By the way, how many people were in your circle? Why not try 10 or 20 or even 50?!

That’s just a couple of ideas, but you aren’t limited to those! Try coming up with different ideas of variables and give them a try.  Remember, you can only change one thing at a time.  If you are testing different liquids, make sure that the other factors are remaining the same.

What does this demonstrate?

The Energy Stick is nothing more than a battery-powered circuit tester with more colorful bells and whistles than most. It’s so sensitive that it can detect an incredibly small amount of electricity traveling across moisture on your skin from one silver ring to the other! It’s a completely safe, but totally cool, way to test circuits, learn about electrical conductors, and identify insulators that block electricity.

Electricity is nothing more than free electrons moving from atom to atom through a material. This flow is called a current. Currents go in one direction at a time, and can be given a very strong charge or a very weak charge. Something that allows a current to move through it freely is called a conductor. Good conductors include most metals such as copper, aluminum, iron, silver, gold, and lead, but there are others like water, mercury, and neon. If a material slows or even stops the current altogether, it offers resistance to the current and is called an insulator. Materials like glass, rubber, plastic, paper, cloth, and wood are very good insulators. However, if the charge is high enough, an insulator won’t stop the current. Not to worry about this with an Energy Stick in your hands.

Since your body is mostly water and there are water and minerals on your skin, your body can be a conductor, but a poor one. The weak current travels from one silver ring onto one hand and then across the surface of your skin to the other hand and onto the other silver ring. This complete loop is called a closed circuit and allows the Energy Stick to do its detection thing. Take a hand off a silver ring and you break or open the circuit and the current stops flowing to the Energy Stick. If the charge is big enough, the current can jump this gap and a bright, blue arc is the result (but it won’t happen with an Energy Stick). Grab the silver ring once more and you make a complete circuit. That’s just what a switch on a wall does or a circuit breaker (or fuse) does in the breaker box on a house. It stops the current. Wow! Look at all you’ve discovered using a simple Energy Stick. So, if an Energy Stick is a circuit tester, what circuits can be tested? 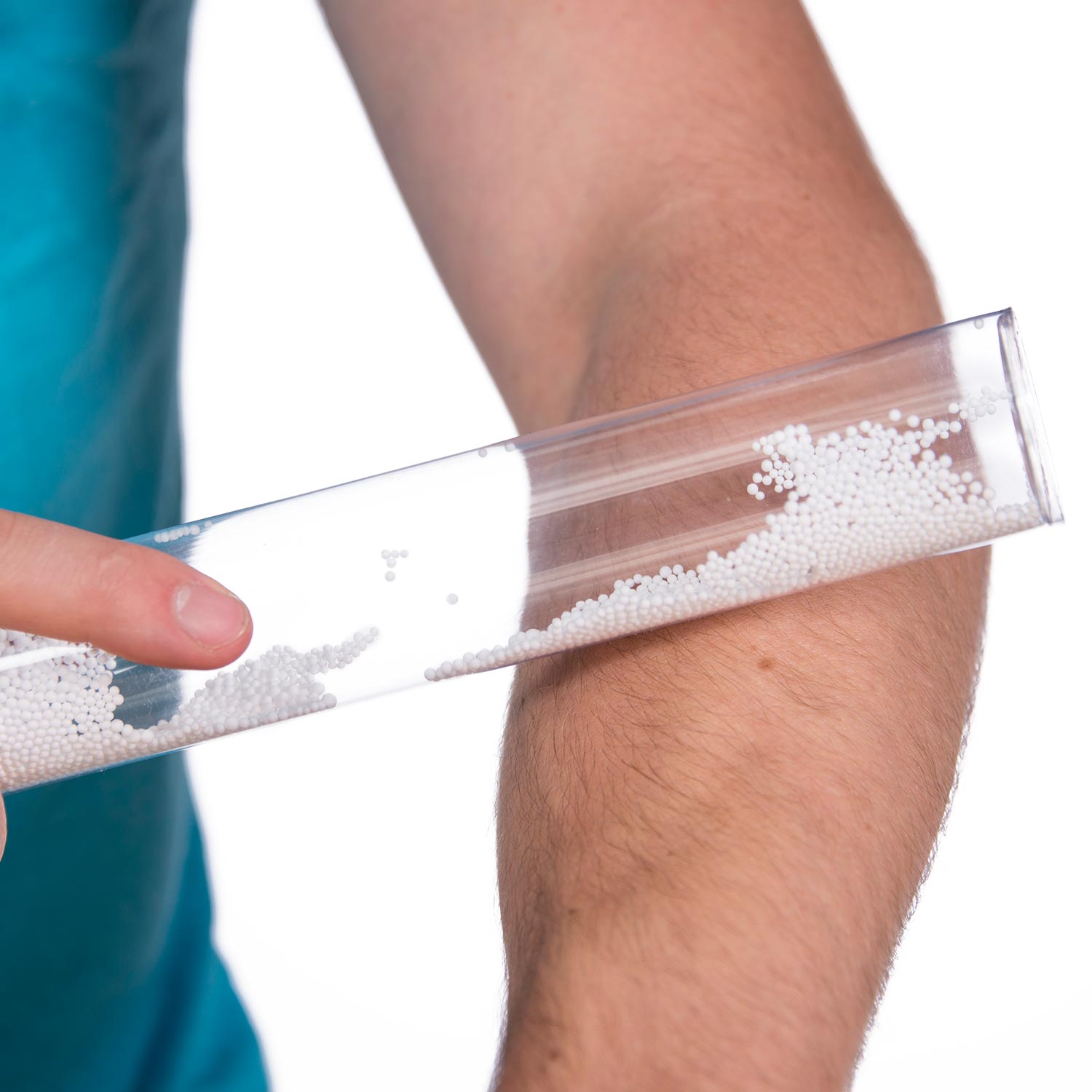 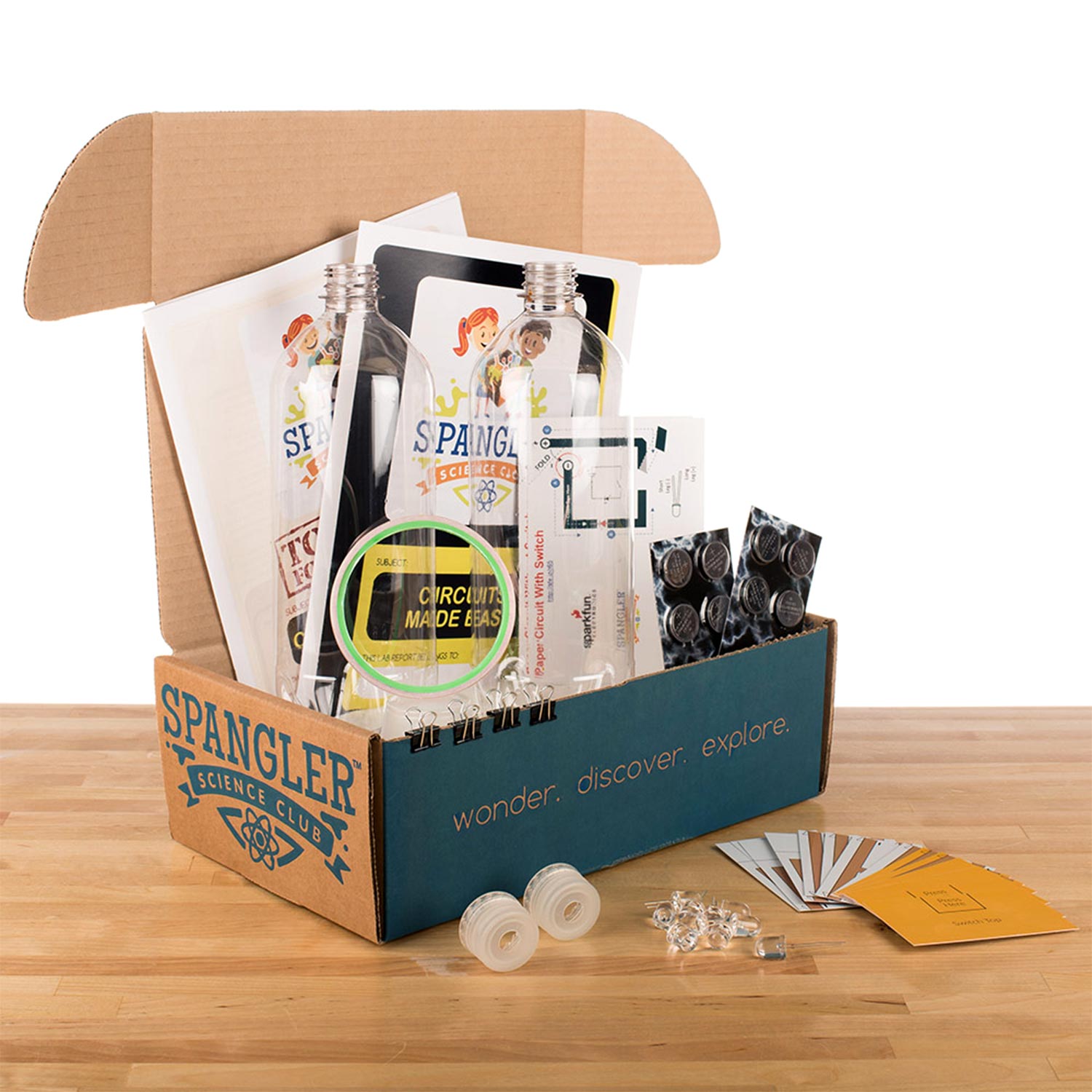 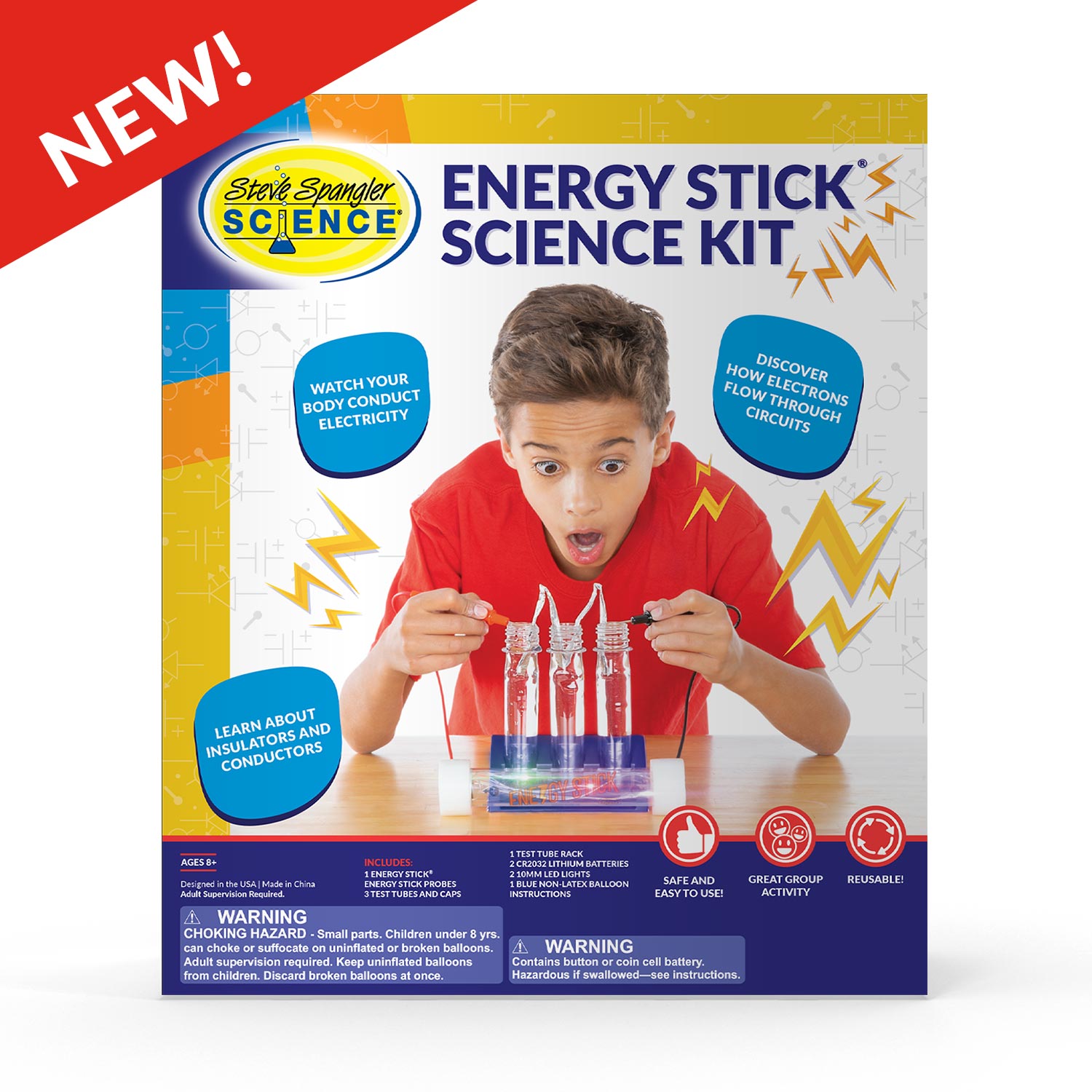 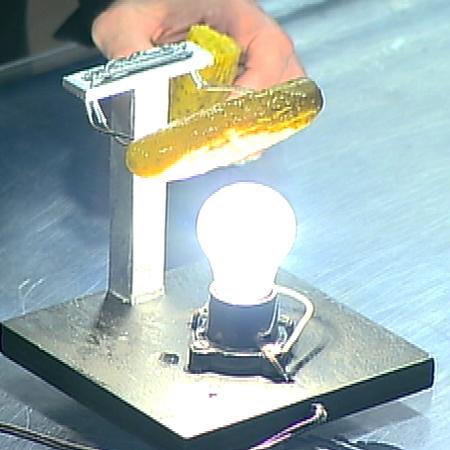 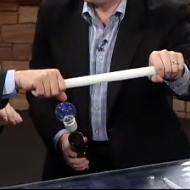