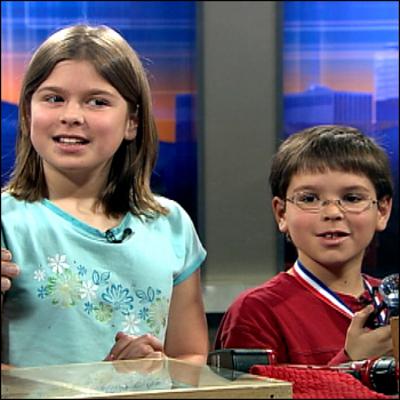 A record set for the most science projects ever shown!

The students, parents and teachers at Wilder Elementary Schoolin Littleton, Colorado, set a record for the most science projectsever shown at the 2007 Science Fair. Over 400 studentsshared their science projects with family and friends during aspecial evening celebration on February 8, 2007. Amber Sutton, afifth grader at Wilder, and her brother, Aric Sutton, joined SteveSpangler on the 4 O’Clock Show to share some of theirdiscoveries.

Mark Koebrich asked Amber about the huge turnout at this year’s Science Fair. Amber explained that every teacher had to do their own science project in class as a way to model the scientific method and to teach students the right way to do a project. Teachers focused on modeling the scientific method by creating an experiment to test a variable, gathering and recording data each day, and analyzing their observations to arrive at a conclusion they called their “Big Discovery.” Many of the younger students did their entire project in class and invited their parents to the Science Fair night event to see what they had learned. Wilder Elementary Principal, Kathleen Ambron, worked with the Gifted and Talented teacher, Barb Herman, and Steve Spangler to provide teachers with the curriculum and supplies needed to pull off this enormous event.

As a guest on the 4 O’Clock Show, Amber shared her experiment for testing the build-up of static electricity on different kinds of clothes using an electroscope made out of a wooden tray with a Plexiglass top. Inside the box was a handful of Rice Krispies. By rubbing the Plexiglass with the cloth, the charged up pieces of cereal jumped around the container.

Aric Sutton is a fourth grader who was on a mission to light a light bulb using a coil of copper wire and magnets attached to a large nail. Aric used a drill to spin the magnets inside the coil of wire… and he created enough electricity to light the light bulb! Aric and Steve showed examples of flashlights that you squeeze to generate electricity. Here’s the weird discovery… even though the packaging on the flashlight says ‘NO BATTERIES,’ Aric and Steve found a battery in the flashlight! But just giving the flashlight a little squeeze, the light came on (powered by the battery and not the electricity generated by squeezing the flashlight). Very interesting! It’s time to tear apart the flashlight and get to the bottom of the “no battery” mystery – there’s next year’s Science Fair project!