You are here: Home1 / Experiments2 / What is a Magnet?

What is a Magnet?

A simple question about magnets is just the start of some great science activities and fun, science-based pranks.

It’s not a stretch to say that, despite having roots in antiquity, magnets are an important part of every aspect of modern life. They come in all shapes, strengths, and sizes and are usually at work well-hidden behind the scenes. The interesting thing is that magnets themselves aren’t as important as the interactions they have with metals. It’s what magnets can do that makes them so much a part of human activity. Of course, having a little fun with them reveals a lighter side to these omnipresent chunks of metal.

NOTE: Checkout the cautions for using super magnets in the Safety Information section below.

CAUTION: Don’t allow the magnets to slam together! You will be injured and the magnets may break in the collision.

The science behind flipping over the magnet comes from the way they’re built. Magnets have a north pole and a south pole on them. (Since the Earth is a giant magnet, it has a magnetic north and a magnetic south pole as well.) There are invisible lines of force that run from the north pole to the south pole that are in three dimensions all around the magnet, too. Opposite poles attract each other but similar poles repel each other. If the magnets attract each other as you move them closer together, you have opposite poles attracting. If #1 flips over before contact is made, similar poles were coming together and the repulsive force between them flipped the magnet.

A copper pipe and a spherical magnet combine to reveal some very advanced relationships. Copper is not normally magnetic but it is still influenced by the presence of the magnetic field passing through it. Essentially, as the magnet falls down the stationary pipe, “eddy currents” are formed in the copper metal that offer resistance to the falling magnet – it gets slowed down! These eddy currents flow in tiny, closed loops within the copper and create their own magnetic field that opposes the magnetic field of the magnet. Basically, they put the brakes on the falling magnet. This is the essence of Lenz’s law. There are commercial uses for this phenomenon that include electromagnetic “brakes” for cranes, power tools, railroad cars, and roller coaster wheels. The magic trick shown in the video is an application of the copper tube effect.

The cup on the roof of a car is a harmless way to have some fun with super-strong magnets. It’s interesting to note that the lid on the cup may come off well before the cup even moves a little bit. Since everyone has done stupid things, those people trying to help out are simply being nice and trying to help you avoid a loss and perhaps a mess. Be nice!

The “empty” can of spray paint is essentially close-up magic. The magician has the audience very close to the action so it’s important that you be well practiced and smooth. You also have to anticipate clerks who may or may not appreciate your sense of humor so be prepared for anything. If you’re cool and unflappable, you’ll likely pull it off and everyone will have had a better day because of the chuckle you provided them.

CAUTION: Don’t allow magnets to slam together! You will be injured and the magnets may break in the collision. Uncontrolled, they come together with enough force to cause serious injuries and smashed fingers.

There is a clear danger to electronics when super magnets are nearby. Keep all digital devices and electronics, including TVs,  at least 6′ (2 m) away from these magnets. This disruption and loss of data they cause can be permanent.

The term “magnet” was probably first used by the Greeks as early as 600 BC. It described a mysterious stone that attracted iron metal and other bits of the same stone. One theory states that the word came from a city in Asia Minor, Magnesia, where many of these mysterious stones were found. During the Middle Ages, this stone was known as “lodestone.” Lode was the term used for journeys and these stones “showed the way to go on a journey.”

Magnets are available in all sorts of shapes including discs, rings, blocks, rectangles, arcs, rods, and bars. They are made out of materials such as ceramic (strontium ferrite), alnico (aluminum, nickel, and cobalt), rare earth (samarium-cobalt and neodymium), and a flexible, rubber-like material. Magnets are usually made of atoms that are so ordered and organized that two poles and a magnetic field are created as a result. The strength of a magnet is measured in gauss or oersted units.

Not only do the shape and material of magnets vary, so do their applications. At many companies, magnets are used for lifting, holding, separating, retrieving, sensing, and material handling. You use magnets in cars and all around your home. Magnets are used to organize tools or kitchen utensils and are found in doorbells, loudspeakers, microwaves, and televisions. The list is nearly endless!

Magnets are a key component in a compass. In fact, the compass was probably the first important magnetic device developed. In the 12th century, it was noticed that when allowed free movement, a lodestone always moved to a north/south orientation. It’s interesting to note that the south pole of the compass magnet points to the north magnetic pole  of the Earth. That means, to go north, you have to follow the south pole. Science rocks! 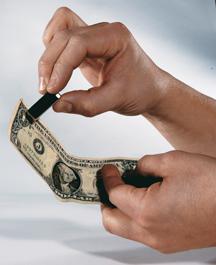