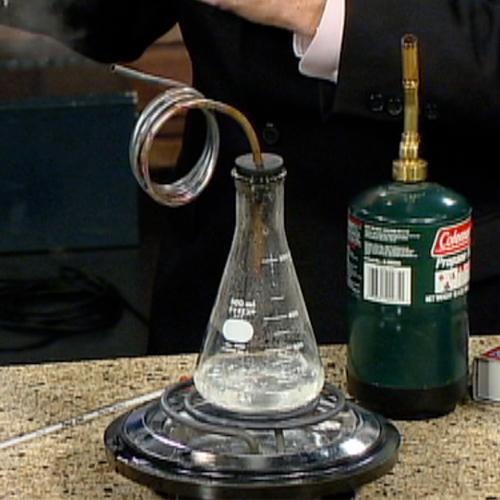 We usually think of water as a substance used to put out fires… but what happens when water turns to steam and that steam gets superheated? Watch in amazement as the steam produced in the experiment is used to create – not extinguish – fire!

The boiling point of water is 100 degrees Celsius (212 degrees Fahrenheit).  When water reaches this temperature it starts to change from a liquid to a gas, creating steam. In order for water to change from liquid to vapor the molecules need energy.  For one gram of water it takes 540 calories of heat energy to convert the water to steam.  This conversion process is called the Heat of Vaporization.  During the Heat of Vaporization, water can exist in both a liquid and gas state because the temperature does not increase, just the amount of energy increases. The steam would have much more heat energy than the water because of the calories of energy it has absorbed.

When the copper tubing is heated with the blow torch, the temperature of the steam increases greatly and energy is absorbed by the steam in the tubing.  However, the water in the flask stays at a constant 100 degrees Celsius.  Since the steam is superheated when it exits the copper tubing, it can easily light the match on fire.