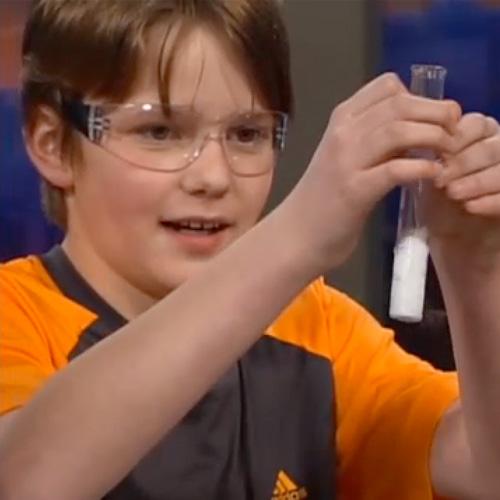 11-year-old scientist Greg Gassen had a great idea for his science fair project. The only problem? He didn’t have access to liquid nitrogen. That’s when he contacted our offices to see if Steve could help him locate some liquid nitrogen… and when Steve found out what Greg wanted to do, he decided to join in on the fun.

Greg set up his experiment by using water as the control – the thing that stays the same in the experiment. He knew that the water would expand, so he used that data as a catalyst for determining if other liquids expanded or contracted when they were frozen with the liquid nitrogen.

Greg discovered that a surprising amount of household liquids actually expanded when they froze instead of contracting. In fact, some of the liquids blew the bottoms right of off the glass cylinders!

If you watched Greg’s video above, you saw that he developed a great science fair project. He knew that water expanded when frozen, and he used that as his control–the thing that stays the same in the experiment. He then ran the same tests with other household liquids to see if they expanded or contracted. Those liquids served as the variables in his experiment–the things that change that allow you to run new tests and make comparisons. He was able to measure the amount of expansion or contraction of each liquid and document his results. That data led him to his conclusions. Clearly, Greg’s experiment follows the scientific method and is a great example of the thought process and steps involved in creating a successful science fair project.

How could you take what Greg did for his project and make it your own?