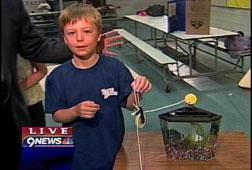 The classic science fair is taking a back seat to a new event.

The classic science fair is taking a back seat to a new event that has kids solving problems with their own inventions. Many parents and teachers in elementary schools are organizing “Invention Conventions” in place of the traditional science fairs and kids are responding in record numbers with great ideas. The non-competitive, highly supportive nature of events like the Invention Convention inspire kids to identify everyday problems, brainstorm creative ideas, and, ultimately, invent a solution that makes us all say, “I wish I had thought of that!”

Many inventors find things that happen in their daily life that cause them to think of some problem in a new way. The inventor of VELCRO ® thought of his invention while removing burrs from his pet’s fur after walking in the woods. Eli Whitney watched a cat pull feathers through a cage — it was how he thought of the invention now known as the cotton gin. Silly Putty was discovered accidentally when the General Electric Company attempted to find a substitute for rubber during World War II. Over 200 million plastic eggs, containing 3,000 tons of Silly Putty, have been sold since 1949.

The students at Wilder Elementary in Littleton, Colorado, shared their inventions and caught the attention of a patent attorney in the community who shared these important resources for protecting their ideas.

The United States Patent and Trademark Office offers a number of resources to help young inventors learn more about protecting their creations. Check out the following website for more kid-friendly information about inventions and patents: