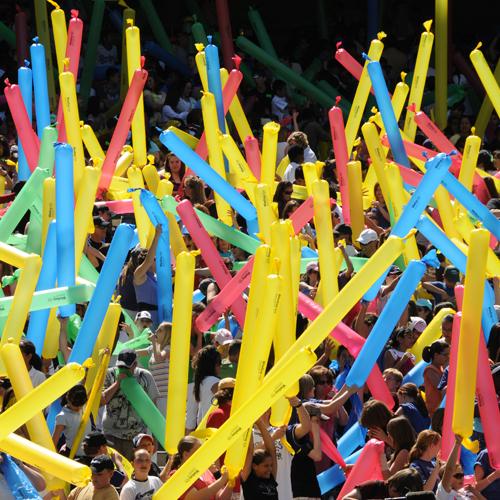 Over 5,000 students armed with Windbags flooded Coors Field in Denver, Colorado to help us set the Guinness World Record for Largest Physics Lesson ever. Science and Weather Day was a huge success with Mentos Geysers, Rockies with Potato Guns, and some very Spangler-esque explosions. And, at the end of the lesson, an official Guinness World Records adjudicator was on hand to present Steve Spangler and the Spangler Science crew with a certificate for the new world record. In conjunction with the Colorado Rockies and 9News, Steve Spangler Science presented the first Weather and Science Day for over 5,000 students attending the coolest field trip ever!

Our Guinness World Record Breaking Physics Lesson was full of some amazing experiments!  We packed lots of learning into 51 minutes and every attendee even had a chance to blow up their own Windbag.  The day started with a cool demonstration that showed how to make the Mentos Geyser into a unique Science Fair Experiment.

Then, the stands erupted as each fan pulled out their own Windbag and created a sea of colorful, wind-filled bags!

As the last Windbag was being inflated, the Spangler team took to the field with a spray of Solar Bags.  One run and they quickly filled with air and took to the sky.

In usual Spangler fashion, the day ended with some large Liquid Nitrogen “clouds”.

Science and Weather Day was a huge success and the team was awarded with a certificate for a Guinness World Record for the World’s Largest Physics Demonstration!