You are here: Home1 / Experiments2 / Glow Jars – Fireflies in a Jar 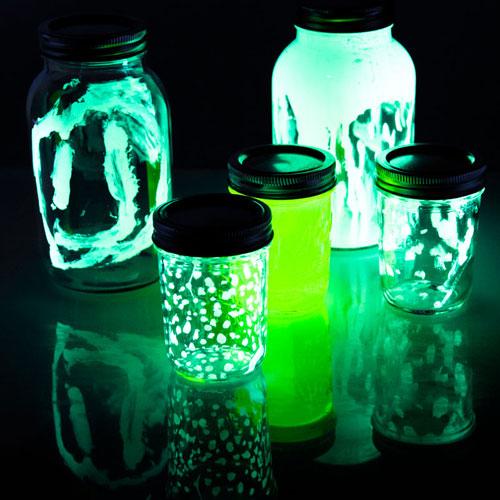 Glow Jars – Fireflies in a Jar

Have you caught fireflies in a jar on a warm summer night? It’s magic to watch the little bugs flash their taillights as they buzz around in the dark. But fireflies are not readily available in all areas of the United States. Here’s a fun and easy activity to make your own firefly glowing jars while learning the science of glow.

This experiment is quick and easy.

ACTIVITY TIME:
Allow about 20 to 30 minutes for this activity. It takes about 5-10 minutes to set up, and depending on the complexity of your glow designs, painting can take 2 to 20 minutes to complete. Let dry for at least 30 minutes before touching. Lids can be replaced and jars will glow right away.

Phosphorescence
Phosphorescence is just like fluorescence, except that the glow continues even after the light used to excite it is removed. “Glow in the dark” toys phosphoresce brightly in total darkness after being “charged” or excited by ordinary white or ultraviolet light. Glow Powder works by absorbing surrounding light energy and then releases that energy when the lights go out. It’s called a phosphorescent.