You are here: Home1 / Experiments2 / Floating Lemons and Sinking Limes 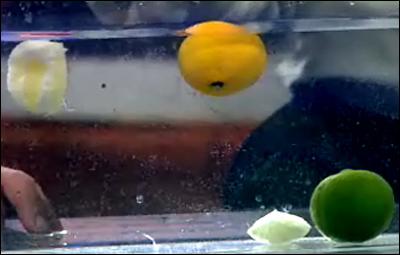 Why do lemons float in water but limes don't?

Scientists seem to be infatuated with objects that float and sink. Even non-scientists find great joy in dropping stuff in water to see if it floats or sinks. Fans of David Letterman are quick to point out one of Dave’s favorite segments called, “Will It Float?” Here’s the latest float or sink challenge: Why do lemons float in water but limes sink? Think you know the answer? Not so fast…

At first, our team of lemon lime researchers were certain that it had everything to do with the rind because of their experience with floating and sinking oranges. Drop an orange into water and it floats, but remove the peel from that same orange and it will sink. The unpeeled orange floats because the rind is very porous and filled with tiny pockets of air. Even though you’re removing mass when you peel the orange, the peeled orange is more dense and sinks in the water. But the lemon lime mystery is a little different.

We have to turn to the Internet for more information. According to the USDA website, a lime is 88.26% water by weight and a lemon is 87.4%. This could mean that lemons have a higher air content, but we’re still not sure.

So, our next step was to weigh the lemon and the lime. Digging through our grocery bag of lemons and limes, we found two that were very similar in size and weight. Both the lemon and the lime weighed exactly 101 grams. If you know the weight, it only makes sense to determine the volume of each fruit. Using displacement of water, we determined that the lemon had a volume of 99 mL and the lime had a volume of 90 mL. You might remember doing this in school when you learned about volume. Fill a container to the very top with water and then submerge the item (the lemon in this case). Collect and measure whatever water spills out over the edge of the container and you’ve got the volume.

So, using the density formula (D=M/V) it was easy to determine the density of each fruit.

Since the density of water is approximately 1 g/mL, it makes sense that the lemon in our experiment floated and the lime sank.

But we’re still a little confused as to why limes sink and lemons float. Some people have suggested that lime flesh is much more dense than lemon flesh and, as a result, it holds its juice better. People who “juice” fruits know about this phenomenon. If you want to get more juice from a lime, warm it up in the microwave briefly and then firmly roll it along the worktop before slicing it lengthways and juicing it. It makes a huge difference.

Since the density of the lemon and lime are very close to water, even very small changes in composition could mean the difference between sinking and floating.