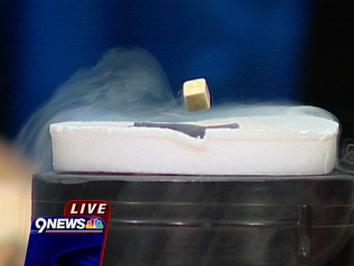 A Look Behind the Scenes at the Space Odyssey Exhibit

There’s lots of cool science going on at the Denver Museum of Nature & Science – literally. Steve Spangler introduced us to Eddie Goldstein, the Senior Science Educator, to learn more about the science of the super cold. Eddie used liquid nitrogen to illustrate the super cold temperatures found on Triton, the largest moon of Neptune.

Triton is colder than any other measured object in the Solar System with a surface temperature of -235° C (-391° F). During our visit, Eddie caused a superconductor to float on a magnet supercooled with liquid nitrogen. In a second experiment, Eddie placed liquid nitrogen in a vacuum chamber and proceeded to remove the air. At very low pressure, liquid nitrogen turns from a liquid to a solid – it looks like snow. When the vacuum is disconnected, the solid nitrogen returns to the liquid state. For his final demonstration, Eddie Goldstein turned a flask of liquid nitrogen into a spewing geyser. This demonstration show is just one of many cool Space Odyssey exhibits at the Denver Museum of Nature & Science. Here’s a sampling of what you can do inside the exhibit…

* Talk to an “astronaut” on the surface of Mars.
* Build your own star and watch its life cycle from birth to death.
* Pilot a Mars rover and fly a digital probe.
* Watch live performances including a news show highlighting current events in space.
* Create your own crater and make a major impact.
* View the world with “infrared eyes.”