Here’s an amazing way to combine scientific principles of physics with the visual science of color mixing to create a gizmo that will have you twirling and spinning for hours. The activity isn’t just visually spectacular, it’s scientifically sound and filled with just enough open-ended curiosity that you’re bound to make many versions of the Color Mixing Wheel.

The mouth of a plastic cup works great as a template for the circle. Use the cup to trace a circle onto a piece of white corrugated cardboard. Try to get the circle to be between 4 to 6 inches in diameter.

Use the bottom of the plastic cup to trace a smaller sized circle onto the cardboard disc.

For the third circle, trace around a plastic soda bottle cap. Of course, you can use anything you want to make the circles, but the goal is to make each circle smaller than the other ones by roughly the same amount (an inch or two). Think of a colorful archery target in which the bands of red and blue and yellow are all about the same width. This will enhance the visual aspect of the experiment.

Draw a single line through the middle of the disc that spans the entire diameter of the disc. Each of the three circles in the disc should now be divided in half.

find someone who’s good with scissors for the next step. Cut out the circle, using the pointed tip of the scissors, place two holes in the cardboard disc. Use a ruler to make sure the holes are an equal distance from the center of the disc and are about 1 inch apart

Use the scissors to cut a piece of string or yarn that is 4 feet long.

Thread the string or yarn through each of the holes in the disc and tie the ends of the string together. Make sure the knot you tie is reliable and able to withstand a substantial amount of force. You are going to be tugging pretty hard on it.

Start by holding the string on both sides of the disc
with your hands. Make sure to slide the disc to as close to the center of the string as possible.

Spin the disc in a motion similar to turning a jump rope. This is a quick way to get the string wound up.

Once the string on both sides of the disc is twisted, pull the string tight to get the Color Mixing Wheel spinning. It might take a little practice to get it just right.

Once you have the hang of how the Color Mixing Wheel works, you’ll be able to keep it going as long as you want.

You may have noticed that the colors you put on the Color Mixing Wheel were the three primary colors: red, blue, and yellow. Once you start spinning the wheel, what do you notice about each of the three colored circles on the cardboard disc? What do you think makes this happen?

Let’s start with the visual part of the experiment—color mixing. The colors you put on the Color Mixing Wheel are the three primary colors: red, blue, and yellow. When you combine two primary colors, you get the secondary colors: purple, green, and orange. Obviously, the individual colors on the wheel are not mixing. The color mixing that happens is due to the speed at which the wheel is spinning as the string twists. The colors are spinning at such a rate that your brain is unable to process them as the individual colors that are on the wheel. Instead, your brain takes a shortcut and creates the secondary colors. 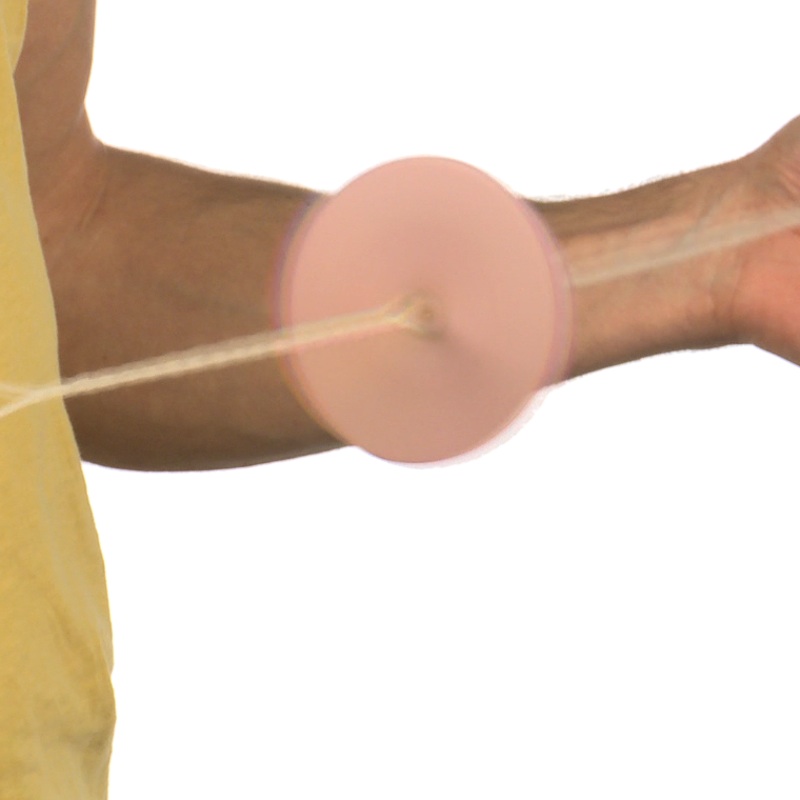