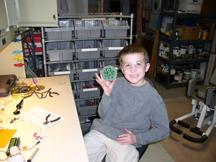 Beyond the Classroom - How to Use a Science Mentor

Steve Spangler is all about getting kids excited about science, but what do you do as a parent if your child’s interest in science goes well beyond what the normal classroom teacher has to offer?

Two years ago, a viewer from the 4 O’Clock Show at 9NEWS contacted Steve for advice about his then six year old son who was infatuated with electronics. His classroom teacher could only help Cole so much until he exceeded her knowledge. Cole’s father, Phil Harding, contacted Steve Spangler for a recommendation on what to do next.

Steve remembered a very successful mentorship between his friend John McConnell and another budding engineer who loved to tinker with anything remotely electrical. For nearly a decade, McConnell and his wife, Audrey, mentored a very talented child, Ryan Patterson. By the time Ryan finished high school, he had earned $400,000 in scholarships, plus recognition as one of the top young inventors in the nation.

John McConnell currently serves as the director of the Western Colorado Math & Science Center, a non-profit, hands-on facility, operating to create enthusiasm and excitement for math and science for all ages. He and dozens of other retirees he trained, volunteer their time to introduce more than 1,000 children every month to the excitement of hands-on science. If you are ever in Grand Junction, Colorado, a visit to this amazing science center is a must!

As you might imagine, six year old Cole Harding and science mentor John McConnell hit it off and the partnership has produced some amazing results. Cole and his father joined Steve Spangler as guests on KUSA-TV 9News in Denver, Colorado to share some of Cole’s cool inventions and to learn more about the value of finding a mentor in any area of interest.

Cole spends lots of time in his electronics lab in the basement of their home in Denver, Colorado.