You are here: Home1 / Experiments2 / Back to School Science That Sticks 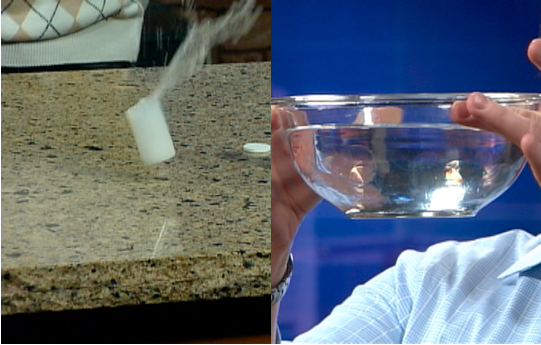 Back to School Science That Sticks

Think back on your own school days and remember the teacher who used the first days of school to read the classroom rules or review the seating chart… and do the exact opposite! You want your students to leave the first day of school bursting at the seams with experiences to talk about at the dinner table. Remember Steve Spangler’s motto, “If it gets to the dinner table, you win.”

The Invisible Student
Place Jelly Marbles in water, and in just a little while the tiny spheres have grown into giant clear spheres. What starts out as a 3mm pebble, quickly becomes an approximately 20mm ball of jelly! Similar to how Water Gel works, these Jelly Marbles absorb a lot of water, plus they maintain their spherical shape when they are done growing.
You’ll need a large, clear plastic (or glass) bowl. Fill the bowl 3?4 full with water and add a teaspoon the pebble-like Jelly Marbles to the water. Allow the Jelly Marbles to rest in the water for 3 to 4 hours (undisturbed). When you return, the Jelly Marbles will be gone? Where did they go? Look closely… they’ve vanished.
Ask the question… What do you see? A bowl of water? Yes, it’s a bowl of water, but it’s also filled with jelly-like spheres that are literally invisible. They start as hard crystals, but when you drop them in water, they expand to 7 times their size. Because the sphere crystals are mostly water, they become invisible once submerged. This is due to an identical index of refraction with the liquid. Our tendency is to see what we expect to see, but sometimes we miss something that is right in front of our eyes. Allow the students to reach inside the bowl to feel what they cannot see, but be ready for a few screams!
Over the years, there’s been lots of talk about the dangers of “invisible students.” This is an amazing way to get students to talk about the dangers of just blending in… becoming invisible… seeming insignificant or believing that no one cares.
The Right Stuff
If you drop an Alka-Seltzer tablet into water, what happens? The little guy starts fizzing and bubbling. But what happens when you drop an Alka-Seltzer tablet into oil? Nothing. The little guy just lays there. The same is true of the mind of a student. When placed in an environment that doesn’t suit them, there’s no excitement, no “fizzing and bubbling.”
You’ll need a couple of film canisters for this experiment. Fill one of the film canisters half full with water and the other half full with vegetable oil. Break an Alka-Seltzer tablet into four equal sized pieces. Drop two of the tablet pieces into the oil filled film canister and two into the water.  The difference is easy to see. The water filled canister begins to fizz and bubble… it’s excited! There’s no such reaction from the oil filled canister. It’s dormant and unexcited.
Now break another tablet into four pieces. Drop them in the film canister that is half full of water and cap the lid. Wait a few moments and… BABOOM! The canister lid goes flying!
This experiment is perfect for demonstrating what the right and wrong atmosphere can do to a student’s learning experience. If the student finds himself in a strong learning environment, they’re excited to learn. They’re so excited that they don’t want to keep it hidden and release it to the world! The wrong environment, however, will lead to a bored and unexcited