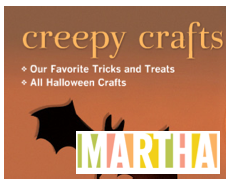 Move over all of you TV science guys… there’s a new science person hitting the airwaves (even if it’s just for a day). A producer from the Martha Stewart Television Show called to let us know that Martha (Ms. Stewart?) likes one of our science products and wants to use it on an upcoming episode of her show. The product creating the buzz (or is that glow) is called Glow Powder, a special powder that absorbs light energy and glows an eerie green color when the lights go off. The glowing pumpkins segment is scheduled to air on October 26th.